The Founding of Current Company B 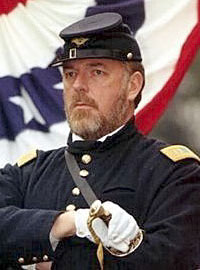 In early 1988, Brian Pohanka was contacted by a fellow who was probably the only movie executive in Hollywood who knew anything about reenacting and living history. His name is Ray Herbeck Jr., who enjoyed reenacting the “fur trade” (mountain men) often at Bent’s Old Fort National Historic Site in southeastern Colorado. There he made the acquaintance of one Bill Gwaltney, who was an interpretive NPS Ranger there.

Herbeck was also involved in the 1984-5 production of the TV mini-series “North and South” (based on John Jakes’ trilogy) which was practically the first time Hollywood made use of living history reenactors to any great extent. Evidently he was impressed by our (Brian and I were both there) portrayal of zouaves at 1st Bull Run and he spent some talking to Pohanka about the history of the thing.

Also, while walking down Beacon Street in Boston one day, another Hollywood movie producer-type, by the name of Freddie Fields, noticed across from the State House, the magnificent Robert Gould Shaw Memorial (by Augustus Saint-Gaudens) depicting what were obviously black soldiers marching with a white officer. He wondered: “What the hell is this all about?” Typically, he had no idea of the history behind it – but, to his credit, he did some research. He decided that the story would make a great movie, which was the inspiration for “Glory.”

Fields knew about Herbeck’s living history background and asked him if he could get black Civil War reenactors to be in the film.

In the mid-80’s, that was basically the truth – there were a couple of guys in Baltimore doing it and there was Bill Gwaltney. That was it, pretty much.

In order to drum up recruits therefore, Fields put together a deal with the C & D Jarnigan Company of Corinth, MS, which was capable of providing a would-be reenactor with literally everything he needed, from forage cap to Jefferson bootees and a musket. The deal was that Jarnigans would sell all that to any black guy who was recruited to be in the movie for $600 – a major discount. But, they had to pay up front, then get the uniform and gear and learn how to use it. When the time came, the movie company would pay each black reenactor fifty bucks a day for two weeks on set which worked out to six hundred bucks for 12 days shooting (less the 2 Sundays.) That way they got to be in a movie and own a complete Civil War outfit, basically for free, afterwards.

Then there was the problem of where to find these guys. They (Herbeck and Fields) came up the idea to contact experienced reenactors they knew (who would be the historically-correct white officers) to recruit in their respective local areas. Different infantry companies would thus be formed in different cities around the country. Company A was the “film company,” with fifty or so full-time extras hired for the entire production and trained by a similarly-hired experienced reenactor officer. Company B would be from the DC area, Company C from Boston, and so on. Company B became the largest and most successful, we had almost fifty men, the next biggest company had about five. (However, the History Department of The Ohio State University, actually fielded a large company of students under Allan R. Millett, my old military history prof and Greg Urwin, then a history professor at the University of Central Arkansas and now at Temple University.)

About this time, the NPS sent Bill Gwaltney on temporary assignment to his native Washington, DC, to manage The Frederick Douglass National Historic Site in Anacostia until they could find a permanent replacement. Herbeck knew he was there now and asked him if he’d like to participate in the recruitment of Company B and of course he responded with a resounding “Yes!”

Next, Herbeck called Brian Pohanka, then residing in Alexandria, asked the same question and got the same response. Ray then told Brian of Gwaltney’s existence, experience and expertise and suggested he ask Bill to be his First Sergeant.

Brian did, and then, as he thought more about the project, he recalled a campfire conversation he and I once had at Fort Ward decrying the lack of African-American involvement in the hobby. We (the 5th New York) had set up a beautifully authentic garrison camp inside the fort, and as we sat looking at it that evening, we realized that there was something rather conspicuous by its absence. Black people! There would have been many in and about such an encampment of the Union Army during the Civil War, but none were to be seen here.

After some discussion, we concluded that it was pretty unlikely that anyone would want to get involved in the hobby for the “fun” of portraying a servant, cook or laborer. However, Brian realized that this was an opportunity to offer something a lot more attractive to black Civil War enthusiasts and historians. He called me, told me what was going on, and asked if I’d like to be his first lieutenant in Company B. Once again, a resounding “Yes!”

Brian and I then went to meet Bill at his office in Anacostia to discuss this radical concept and the rest, as they say, is history. The nucleus of Company B was born.

To bring this rather long story to a conclusion, after the filming of “Glory” was complete, most of the members of Company B decided they wanted to continue reenacting in camp and field, at schools, in parades and the like, to keep the history alive and in front of the public (especially school children.) However, Brian – as he had always planned to do once the movie project was done – went back to Company A of the 5th New York “Duryee’s Zouaves” as the commanding officer. Thus, as his first lieutenant, I was elevated to the rank of Captain, Commanding, Company B, 54th Massachusetts Volunteer Infantry – a privilege and honor I held until my “retirement.” 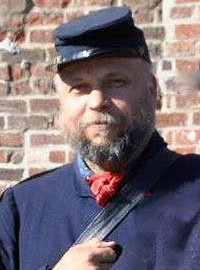 I was working at the Frederick Douglass National Historic Site in Southeast D.C.

I had already spent 10 years doing Indian Wars Drill and Living History in the west with Upton’s Tactics in the National Park Service and with a private group called the General Miles Marching and Chowder Society. So far as anyone can tell, I was the only African American to serve in that unit. My impression was a soldier in Company “K” 25th US Infantry (1877, later revised to 1869, so I could use Civil War uniform parts to save money.)

Having followed Frederick Douglass from his first house in DC, to his second house in DC, and having spent summers at Highland Beach, where two of his sons built him a house in 1895 (He never lived to enjoy the house) I felt that somehow I knew Frederick Douglass. In fact, he has gotten under my skin and I think of him almost daily.

Getting interested in Douglass’ involvement with the Civil War, I wanted to recruit men for what was going to be the First USCT, which was raised in the Washington, D.C. area and drilled on Analostan Island, now Teddy Roosevelt Island near the Kennedy Center.

I assembled most of the gear at 125th events and was already outfitted with a  M1863 Springfield. I went to 125th events, such as Gettysburg in the hopes of finding African Americans for the 1st. I found a few, and began planning Interpretive events at the Douglass home.

After arriving back from Gettysburg, over the 4th of July Weekend, the phone rang. A voice said, “Mr. Gwaltney, you don’t know us, but we know you and we would like to invite you to be in a Hollywood movie,..”

It turned out to be Assistant Producer Ray Herbeck.

He was calling from Tri-Star Pictures, and at the time, the film was still named “Lay This Laurel.” It was later changed to Glory.

Herbeck wanted to know if I would act as recruiter/trainer for a company of the 54th.

I checked with my boss, a fantastic Black woman named Dottie Benton. If anything, she was more excited about it that I was. She told me to proceed and to recruit the Company as a National Park Service Volunteer In Parks group.

I called Herbeck back to say “Yes!”

Herbeck wanted me to meet with two experienced Civil War re-enactors from the 5th New York. They agreed to meet at the Douglass House and together, Brian Pohanka, Jack Thompson and I hatched the plot to create Company “B.”

I knew my way around Fur Trade and Indian Wars Living History, even the Horse Cavalry, but the Civil War was a new area for me. Brian and Jack were already old hands.

I remember Brian saying, this could be great, but we need a Black man to be the First Sergeant.

Due to my light colored skin, he hadn’t yet figured out I was African American. I soon set that right and off we went together into the recruiting business.

Jack, Brian, and I had another meeting which really sealed the deal at the NPS Old Post Office building on Pennsylvania Avenue at the Fox and Hound.

More about Bill Gwaltney and “The War that Shaped America”

An accurate portrayal of blacks in the Civil War is our objective and in order to achieve this, we need men with a strong interest in history and the motivation to do the job well.

Our recruits will have the opportunity to see history come to life and be a part of it.

Visit our Membership Information page to learn more and/or to fill out an application.