The Filming of “Glory” 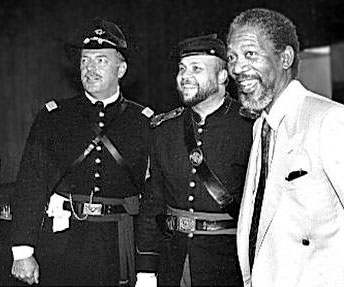 In 1989, many of our members portraying soldiers and serving as technical assistants participated in the filming of the Academy Award winning film “Glory” which tells the story of the 54th Massachusetts and it’s Colonel, Robert Gould Shaw.

Although almost 200,000 black Americans served in the Union Army during the Civil War, their bravery and sacrifice in the cause of freedom have been largely ignored. Few of our country­men are aware of the important role of black soldiers in that war because they have never been accurately portrayed in film nor adequately represented in the hobby of living history (re-enacting). We have changed that situation by our portrayal of the 54th Mass. in the production of Glory, a feature length, Hollywood motion picture. This movie has helped raise the level of awareness (on the part of both whites and blacks) of Negro contributions to the preservation of the Union and the abolition of slavery. 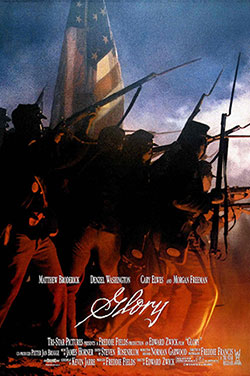 Glory is a 1989 American drama war film directed by Edward Zwick and starring Matthew Broderick, Denzel Washington, Cary Elwes and Morgan Freeman. The screenplay was written by Kevin Jarre, based on the personal letters of Colonel Robert Gould Shaw, the novel One Gallant Rush by Peter Burchard(reissued in 1990 after the movie), and Lay This Laurel (1973), Lincoln Kirstein‘s compilation of photos of the monument to the 54th Massachusetts Volunteer Infantry on Boston Common.

The film is about the first formal unit of the Union Army during the American Civil War to be made up entirely of African-American men, as told from the point of view of Colonel Shaw, its white commanding officer. They were the first unit of what became known as the United States Colored Troops and known for their heroic actions at Fort Wagner.

The film was nominated for five Academy Awards and won three, including Denzel Washington for Best Supporting Actor for his portrayal of Private Trip. It won many other awards, including from the British Academy, the Golden Globe Awards, the Kansas City Film Critics Circle, Political Film Society, the NAACP, among others.

The film was co-produced by TriStar Pictures and Freddie Fields Productions, and distributed by Tri-Star Pictures in the United States. It premiered in limited release in the U.S. on December 14, 1989, and in wide release on February 16, 1990, making $26,828,365. It was considered a moderate financial success, taking into account its $18 million budget. The soundtrack, composed by James Horner in conjunction with the Boys Choir of Harlem, was released on January 23, 1990. The home video was distributed by Sony Pictures Home Entertainment. On June 2, 2009, a widescreen Blu-ray version, featuring the director’s commentary and deleted scenes, was released.

One man’s recounting of his involvement with the filming of “Glory” and his photo journal.

Eve of the Battle of Fort Wagner