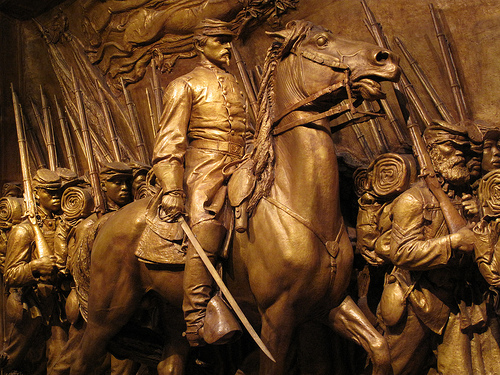 When the National Gallery of Art unveiled Augustus Saint-Gaudens’s memorial to Robert Gould Shaw and the Massachusetts 54th Regiment, retired Gen. Colin Powell made the following remarks about the statue and the soldiers who died in the assault on Fort Wagner in South Carolina on July 18, 1863.

I doubt if plaster and bronze have ever spoken more eloquently to us than in this celebrated work by Augustus Saint-Gaudens. What a powerful image we see — proud, young, fatalistic Colonel Robert Gould Shaw and his Negro soldiers, heads high, rifles on their shoulders, resolution in their every step as they move southward with fortitude. The scene is May 28th, 1863, in front of the Statehouse in Boston, on their way to glory.

But to understand this memorial and to put it in perspective, you have to go way back before 1863. You have to go back to the birth of our nation in 1776. You have to reflect on the ringing Declaration of Independence that said all men were created equal, and these truths were self-evident, and they were granted certain inalienable rights: life, liberty and the pursuit of happiness. It also said that governments are instituted to secure these rights for our citizens. But it was just as self-evident at that time that there was a group of citizens that was not included. If your skin happened to be black, these rights did not accrue to you.

In this dehumanization and degradation of a group of Americans lay the true horror of the mortal sin of slavery. A nation that is blessed [like] America, as we thought ours was by God, could not long endure with this dichotomy. As the years went by it became clear that a great struggle would be required to throw off the yoke of slavery, and that great struggle came to us with the Civil War in 1861.


“To my dying day, I will not forget that I became chairman of the Joint Chiefs of Staff because of the men of the 54th Regiment”

At that time, black Americans were still denied every opportunity to show what they could do, to demonstrate that they were equal to their white brothers, except in one regard, and that was their blood was as red as their white brothers’. And so in the Revolutionary War, blacks had been permitted to serve, and in the War of 1812 and in other conflicts that came along, but as soon as the conflicts were gone and the danger was past, they were no longer allowed to serve. They were put back in their place.

But now this great struggle was before us, the struggle to throw off slavery once and for all. It was in that period where it became clear that black men had to be part of the struggle. Lincoln was not supportive of it initially. It was thought to be too radical an idea. But by 1863 the losses had accrued at such a level that there was a need for manpower, and the issue was joined as Frederick Douglass and the abolitionists pressed their case on Lincoln.

The Confederacy was going through the same difficulty, and a Confederate general by the name of Harold Cobb heard that Jefferson Davis was planning to recruit Negroes to the cause of the Confederacy. General Cobb wrote to Jefferson Davis and said, “Don’t do it. You can’t do this. Use Negroes for whatever purpose you choose, such as chopping and digging and planting, and as servants, but don’t make them soldiers, because if you make them soldiers, if they can stand on the field of battle with white men — if that is true, then the whole theory of slavery is wrong, and this Confederacy cannot endure.”

Frederick Douglass saw the same problem, and he took advantage of it. And his statement to Lincoln and the others was, “Once you put upon the black man the blue uniform, once you put upon him the `U.S.’ saying `United States,’ once you put brass buttons on him and a cap and give him a rifle and give him a pistol and make him a soldier of the nation and send him off in battle to defend the nation and also to help preserve the Union, once you have done that, then no power on Earth can deny the full rights of citizenship in due course.” It was the one institution in all of American society where the black man was equal to his white brother.

And so when the word went out from the government, with Frederick Douglass’s encouragement, and Massachusetts’s call to arise, they arose. Hundreds volunteered to serve, so many that the 54th Regiment was filled almost immediately and a 55th Regiment had to be created. But it was the 54th that marched off into glory on May 28, 1863, as they paraded — as you see them — in front of the Statehouse, past their governor, Governor Andrews, and headed south to destiny, to death.

Seven weeks after the scene depicted here, we had the battle of Fort Wagner, and you know the story. I hope you’ve seen the wonderful movie. You know how it ended, with Robert Gould Shaw dead in a trench, leading his Negro soldiers; 281 of the 600 members of the regiment were casualties, but they had shown what they could do. They had demonstrated what they could do. And before the war was over, some 200,000 Negroes had served. As a result of their service, they had helped preserve the Union and moved us one step closer to equality. But even with the 13th and 14th and 15th Amendments, we still didn’t get all the blessings of liberty or what had been earned by the service of black men. It took another 100 years — another 120, 130 years — and that brings us to the present.

We have seen such progress with respect to the integration of our society. We have seen so much progress with respect to what black persons can now do in this country. I stand before you as a direct descendant of every one of those Negroes. I was able to rise to become chairman of the Joint Chiefs of Staff, the senior military position in the armed forces of the United States, but I have a direct lineage back to the men of the 54th and to all those who came before them, back to the Revolutionary War.

It’s a lineage that I will never forget. It is a source of inspiration and strength to me and has been for many years, and I hope that with this marvelous statue here at the National Gallery, the nation’s capital will continue to be a source of inspiration to millions of Americans, white Americans and black Americans, reminding us of a time in the past that we must never forget — but also showing to us how far we have come, and also reminding us that the struggle has to continue for a while longer, until we are the more perfect Union, the most perfect Union that our Founding Fathers intended.

This is a scene of glory. It is a scene of sacrifice. It is part of our history, and it is most appropriate that it remains here in the nation’s capital as a source of inspiration for young people and old people, for all Americans and for those around the world who will come here and see this marvelous work of art. I am pleased to be part of this ceremony here this morning. Thank you.

"Augustus Saint-Gaudens: Master of American Sculpture" is a feature documentary film by Paul G. Sanderson III on the life and work of the great American sculptor Augustus Saint-Gaudens (1848-1907). Trained in Paris and Rome, Saint-Gaudens is considered Americas premier sculptor of the 19th and early 20th centuries and created many of the public monuments honoring Civil War heroes in major cities throughout the United States. The story of his personal life is woven around in-depth studies of six of his major works of art including the intensely moving Shaw Memorial on Boston Common (which inspired the film Glory), which is featured in this excerpt. The documentary is a production of Our Town Films and the Saint-Gaudens Memorial with assistance from the Saint-Gaudens National Historic Site, the home, studios and gardens of the sculptor now a national park in New Hampshire. The film is available at PBS Home Video.

Collection of the Massachusetts Historical Society